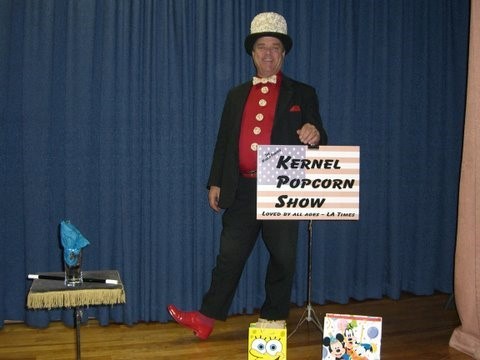 Kernel Popcorn is a native of Victoria, British Columbia on the west coast of Canada. He entertains locally but is more familiar to military families stationed around the world. This December marks his 27th global tour. His work as an entertainer led him to Italy, Spain, Germany, Iceland, Guam, Hawaii, Japan and Korea. His family entertainment show fills theaters, restaurants and special event venues.

His very first performance for the US military was at a summer open base event at Yokosuka Naval Base. His Christmas tour remains essential to the Yokosuka community. We met the “Kernel” after one of his shows at the Admiral Arleigh A. Burke Officers’ Club. While conversing we realized his comments on professionalism, work ethic and time management would be interesting to not only entertainers but anyone working for success.

He agreed to a Skype interview and took the call this morning in full costume. The interview was scheduled for 8 a.m., and the “Kernel” was prepared for his 10:00 a.m. pick up for a show at the Benny Decker Theater. Following are interview highlights:

The Kernel Popcorn character was developed after I heard about two university students given the moniker “the popcorn guys”. They brought huge bags of popcorn to parties and were always welcome. No one remembered me as Scott the magician wearing a white shirt and tie. People remembered me when I used popcorn for every trick while dressing in a popcorn hat, a coat with popcorn buttons, and donning a popcorn ring.

The best advice I (Kernel Popcorn) can give to a young entertainer is be user friendly. Emulate a fireman and be ready to go on a moments notice.

Do everything within your control to be on time. Terrible traffic and accidents happen but whenever possible leave early enough to over-come unexpected mishaps. I work to be prepared but once I arrived at location to find that everything was packed and ready for the show but my dress shirt. I forgot to pack my magicians’ shirt. There was time to buy a white t-shirt from a nearby convenience store and the show went on without delay.

Always start on time but never early. The show time is a promise to the audience.

I’ve met hundreds of other entertainers over the years but one chance meeting on a movie set in my home town of Victoria stands out. A gentleman was standing in a trench coat and a fedora hat on the edge of the set while lighting was being adjusted. I asked him if he was an extra for the movie? He answered that he had a part in the film and seemed very nice. I introduced myself as Kernel Popcorn. He introduced himself as Steve Martin. (Yes, I’m embarrassed to say, THE Steve Martin.)

The famous ventriloquist Willie Tyler and his partner Lester were on the same USO tour that I joined a few years back. I went to his room to invite him to join me for lunch but hesitated at the door because there was an argument in progress inside Willie’s room. When it quieted, I knocked, and Willie answered the door. He was only accompanied by his puppet Lester. Maybe he was practicing but then again……………………

I try to add new things to my show to keep it fresh but it’s more important to bring enthusiasm and polish with proven tricks. People forget and faces change. Parents that watched my show as children are bringing their kids to performances. One man told me about a show he’d watched me perform at a base in Rome years ago. I’ve never been to Rome, but he told me he enjoyed my act. He mentioned some of my unique performance concepts and must have watched my show somewhere else.

Be disciplined and pack your equipment immediately after each show. This habit has saved me numerous times. Travel schedules change, requests for last minutes shows can be accepted, and extra time allows mental preparation for the next show.